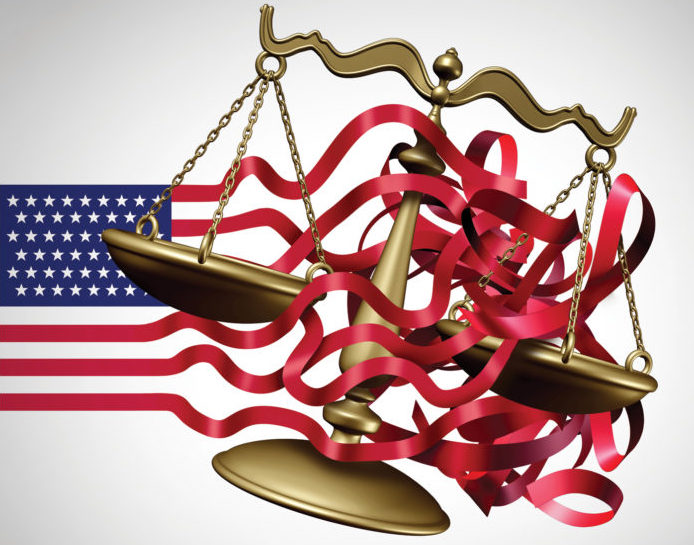 Notoriously liberal California is the last place one might expect to erupt in a CBD-related fuss. Nevertheless, a new official stance has touched off a veritable storm of controversy. According to an FAQ distributed by the California Department of Public Health, Food and Drug Branch, food and beverages containing hemp-derived CBD oils and isolates may not be sold in the state. The reason? Unlike hemp seeds and hemp hearts, CBD extracts have not been approved by the U.S. Food and Drug Administration for human or animal consumption.
Among other things, the FAQ states:

• CBD derived from industrial hemp may not be added to “food, drink, confection, condiment, or chewing gum” intended for use “by man or other animal.”
• Manufacturing and sale of non-food CBD products requires a commercial cannabis license.
• Cannabis edibles are not considered a food but may contain only marijuana-derived CBD.
• Licensed retailers may sell only marijuana-derived CBD products.

The FAQ has been difficult for businesses to process.
“The state’s decision not to allow sales of any food, beverage, or animal product that contains hemp-derived CBD took many by surprise,” said Bryce Berryessa, president of edibles manufacturer La Vida Verde. “It seems the only CBD products that will be legal are those manufactured by state-licensed cannabis companies and sold through state-licensed cannabis retailers and delivery services.

“This decision is likely motivated by the fact that if the only legal CBD products allowed for sale in the state are within the parameters of the legal cannabis industry, the state will collect [from growers] a cultivation tax of $144 per pound of CBD flower and an additional 15-percent excise tax at the register from consumers,” he continued. “In addition, CBD products will also be subject to local taxes imposed on cannabis businesses. Any grocery store, gas station, head shop, or other establishment that sells hemp-derived CBD products is not subject to the heavy taxation and regulations imposed on the newly legal California cannabis industry.”

“The decision by [DPH] to not allow a vast majority of hemp-derived CBD products to be sold within the state is unfortunate,” he said. “California does not have a cannabis-derived CBD industry and likely will not have this agricultural commodity at scale for years to come. It’s an unfortunate decision, as it potentially cuts off the supply of CBD—a non-toxic and non-psychoactive compound—to hundreds of thousands of Californians who rely on it as a crucial component of their health and wellbeing.”

Orange-County-based attorney Dana Cisneros was among the first to call attention to the change in policy and potential problems with due process…or lack thereof.

“That FAQ was based on [DPH’s] perceived power to interpret and, I guess, enforce what they consider to be the state of the law,” she said. “I should say I think the California Department of Public Health, Food and Drug Branch, overstepped its bounds in terms of separation of powers and what an agency is authorized to regulate. They come right out and say in the FAQ there is no law on the books regarding hemp-derived CBD and products, but they are saying that because they do have governance and jurisdiction over retail food and dietary supplements, that’s where this FAQ is coming from.”

Cisneros said cannabis’s hazy legal landscape does not exempt state agencies from staying within the boundaries of their authority.

“The thing is, they shortcut the process,” she said. “I think this is clearly a regulation in terms of the definition under California law. But what they’ve said is CBD derived from industrial hemp, if not from the stalk or seeds, is unlawful in the state of California as a food, food additive, or dietary supplement.

“They get that from the FDA, claiming the FDA has concluded CBD derived from hemp is a Schedule I narcotic. [Therefore,] it is not allowed to be added to a food, and it can’t be a dietary supplement,” she explained. “In fact, what the FDA says about CBD has nothing to do with hemp or cannabis. It has to do with the molecule itself.

“Even emergency regulations have a public comment period and a time where the public can put in its two cents,” Cisneros pointed out. “Because the Department of Public Health just decided to, on its own, make this up, they completely shortcut the process. They’re not the legislature; they don’t get to make law. They’re not the judicial branch; they don’t get to say what the law is. They’re an administrative agency, which is a department of the executive branch.

“The decision by the Department of Public Health…cuts off the supply of CBD to hundreds of thousands of Californians who rely on it as a crucial component of their health and wellbeing.” —Bryce Berryessa,  president, La Vida Verde

“So, I think they went about this in the entirely wrong way. If they had wanted to do this legally, they should have filed a notice with the Office of Administrative Law and opened it up for public comments, even if on only an emergency basis. At least then interested parties would have had the opportunity to participate in the rule-making process. They’ve deprived Californians of that right.”

At global cannabis law firm Hoban Law Group, Bay-Area-based attorney Patrick Goggin specializes in California hemp law. He also emphasized what Cisneros stressed: The FAQ is an interpretation of law, not law on its face and, therefore, arguable in court if necessary.

“This position—it’s a position. It’s not law,” he said. “It’s an interpretation of the law, and it’s echoing and mirroring the FDA’s position on CBD. And the position is fundamentally flawed because it is, in part, based upon the assumption CBD is scheduled. It’s misinformation the Drug Enforcement Administration has been spouting and putting out there for a long time. CBD is scheduled [under the federal] Controlled Substances Act when it’s sourced from marijuana, but it is not when it’s sourced from industrial hemp.

“The DEA just does not make that distinction,” he continued. “They have consistently attempted to reinterpret and redefine industrial hemp and the hemp research amendment attached to the Farm Bill, in spite of the fact Congress has repeatedly pushed back and said, ‘No, no. DEA, you are misunderstanding what is allowed under the Farm Bill, what our intentions were behind that.’

“And so, fundamentally, the premise that CBD or hemp extract are an unapproved food additive is on the basis that it’s a drug. And it’s not. So that’s number one, from a federal level.”

Number two, Goggin explained, exists at the state level. “The State of California, under the health and safety code, has defined industrial hemp as separate and apart from marijuana and cannabis for all purposes,” he said. “The definition of industrial hemp includes resins extracted from all parts of the plant. We don’t have a restriction on extract. It’s clearly included within the definition.

“So, we believe both the premise upon which the FAQ has been issued is fundamentally flawed, and it’s in conflict with state law,” he continued. “We’ve reached out to the department to educate them about the issues they’ve opened up and expressed in their FAQ, and we’re working with them to…influence the FAQ in an attempt to get them to withdraw it or pull back from it. [If the agency doesn’t], then we’ll potentially have to look at moving forward some alternative solutions, which may require some sort of legislative fix.”

Goggin said he believes, given enough pushback, the department will “walk back” from the FAQ. Until it does, however, the situation could become a bit tense. “That’s kind of the $64,000 question right now: What level of enforcement will come as a result of the FAQ being issued?” he said. “It really depends upon the local jurisdictions and departments of public health and how on top of the issue [they are] and how energized they are to enforce against it. We say be very cautious with that, because this is not an opinion that’s based in statute or is on solid ground at all.

“The problem is it hasn’t been litigated at the federal level,” he continued. “So, you have this standoff between FDA and the industry. We’re going to see who blinks first or whether there’s going to be litigation to resolve it. That remains to be seen. We’ve been in this position since early 2016, when the FDA asserted its position that CBD is an adulterant and cannot be marketed as a dietary supplement. We have fundamentally disagreed with them.”

WHERE DO WE STAND?

Officials in U.S. states continue hashing out CBD oil and infused product regulations while federal agencies wait on each other to render decisions without which nothing can proceed on a national level. Lacking clear federal guidance, states are on their own to manage individual marketplaces. Some are handling the task better than others.

IN MAY 2018, the Michigan Department of Licensing and Regulatory Affairs announced hemp-derived CBD oil and infused products would be regulated under medical marijuana laws. CBD products in Michigan may be purchased only at licensed dispensaries.

IN JULY, the California Department of Public Health, Food and Drug Division, issued a set of FAQs that prohibit the sale of hemp-derived CBD dietary supplements in addition to foods and beverages infused with hemp-derived CBD. Marijuana- derived CBD products, including edibles, may be sold in licensed dispensaries.

THE FOOD AND DRUG ADMINISTRATION in late June approved cannabis-derived epilepsy medication Epidiolex, developed by UK-based GW Pharmaceuticals. Approval of the drug forced the Drug Enforcement Administration to consider rescheduling cannabis, making an exception for CBD as a compound, or scheduling Epidiolex independently. The agency went with the latter option, placing Epidiolex on Schedule V.

THE UNITED STATES is the world’s largest importer of raw hemp and hemp products. U. S. companies purchase $300 million of hemp annually from countries like France, China, and the Netherlands. The 2018 Farm Bill legalized hemp farming but left the federal status of CBD unclear.

DESPITE REGULATORY OBSTACLES in the U.S., market research and experts predict the hemp-derived CBD oil market will be a multibillion-dollar industry
by 2020.