“Based on his successes on and off the stage, we initially approached Gene to become ‘Chief Evangelist Officer’ of Invictus, but his role has grown far beyond that,” said George E. Kveton, chief executive officer for Invictus, in a press release.

“Simmons’ MoneyBag™ Sodas are exceptional, and working with Rock and their notable distribution channels, new line of CBD-infused sodas will catapult our growth and position in the CBD beverage space.”

The sparkling beverages are CBD-infused with flavors including a cola, diet cola, root beer, ginger ale, and cream soda, and sweetened with pure cane sugar. 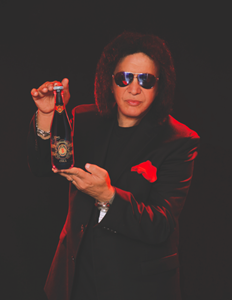 “Invictus has a great platform to assist Rock with the procurement and launching of a new CBD Beverage line under the MoneyBag™ Soda brand,” Simmons stated. “We launched this brand in 2018 and have seen tremendous growth in sales and distribution in a very short amount of time. A CBD line will directly attach to our existing distribution channels and the premium quality of the products will provide customers with an exceptional experience every time.”

CBD, aka cannabidiol, is a non-psychoactive cannabinoid compound derived from hemp, which is attributed with anti-inflammatory, anti-seizure, and pain relief benefits.

CBD extract typically contains only trace levels of THC, the psychoactive ingredient in cannabis, and so CBD-only infused products do not produce ‘high’ effects for users. Simmons, despite his rock star persona, has famously always claimed that he never used or abused drugs, unlike other entertainers of the era.

Aside from being a rock legend, Simmons also is an author, speaker, reality TV star, and entrepreneur. As a musician and marketer with KISS, “the band sold more than 100 million albums; [as well as] building a merchandising/licensing empire with over 5,000 licenses including everything from t-shirts and comic books, to pinball machines, credit cards and lunchboxes; and broke box office records set by The Beatles and Elvis.”